The traditional Advent campaign has now begun. The money from this year’s campaign goes to the work Caritas does to teach Columbian youngsters aquaculture.

This year’s Advent campaign is about making sure that the best of Norway becomes the best for Columbian youth. You will give meaning to the lives of young people, by giving them an opportunity to train and work in aquaculture. This gives them an alternative to working for the violent criminal organizations that are still active in the region.

Fish is a popular food in Colombia, and demand is still much larger than supply. This is especially true for those fish that are bred in the Amazon forest. The most popular fish is a type of piranha called Cachama, which can weigh as much as 35 kilos. The most valuable of the fish from the Amazon is called the Piracucu. Through this project we will sustainably develop the resources of the Amazon and allow young people in the region to take part in this development. 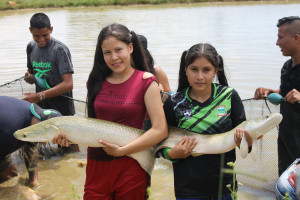 Caquetá, a region of Colombia, is home to less than 500 000 people. This is a part of the Amazon where the Colombian civil war has been a feature of daily life for more than 50 years. The kids have grown up in an area controlled by FARC-EP, an organization designated by both the US and the EU as a terrorist organization.

When the peace accords between FARC and the Colombian government were signed in 2016, people in Caquetá hoped for a better tomorrow. For decades, young people had been forced to take part in the guerilla war against the government. Every family was forced to give up at least one child to the guerilla. This tradition lasted for many generations.

Fish is a part of the future

The Caquetá region is resource rich. This is especially true once you consider the many rivers that can be seen meandering throughout the terrain. This water gives an advantage Norway has a lot of experience with. Through Fish for Development, Caritas Norway gives 400 youngsters in Caquetá training and business opportunities in aquaculture. In this way, Norwegian know-how is used to develop a sector with great potential for the entire region.

Caritas Norway has extensive experience from working in Caquetá. In addition to our work with youth, we reintegrate former FARC soldiers into civilian life, protect the rain forest and work to protect leaders and activists that are a target for drug cartels and militias due to their important work.

Send your contribution by VIPPS to number 93083.

About the Author: Martin Moland